The two Colossi of Memnon 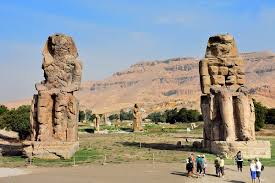 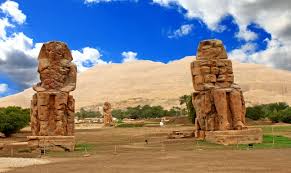 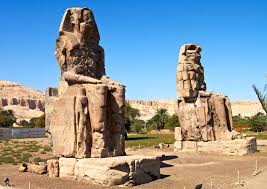 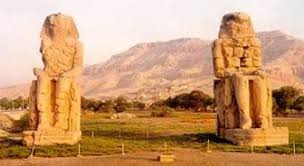 The Colossi of Memnon (also known as el-Colossat or el-Salamat) are two monumental statues representing Amenhotep III They are located west of the modern city of Luxor and face east looking toward the Nile River. The statues depict the seated king on a throne ornamented with imagery of his mother, his wife, the god Hapy, and other symbolic engravings. The figures rise 60 ft (18 meters) high and weigh 720 tons each; both carved from single blocks of sandstone.

Their name comes from the Greek hero Memnon who fell at Troy. Memnon was an Ethiopian king who joined the battle on the side of the Trojans against the Greeks and was killed by the Greek champion Achilles. Memnon's courage and skill in battle, however, elevated him to the status of a hero among the Greeks. Greek tourists, seeing the impressive statues, associated them with the legend of Memnon instead of Amenhotep III and this link was also suggested by the 3rd century BCE Egyptian historian Manetho who claimed Memnon and Amenhotep III were the same person. popular tourist attraction and in the present day one can see graffiti inscribed on the base from visitors thousands of years ago.