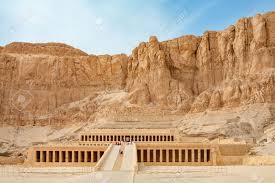 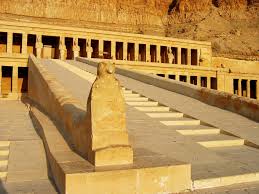 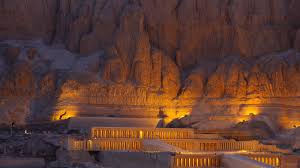 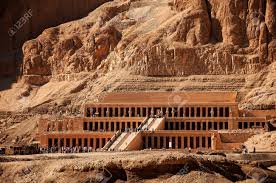 Located on the western bank of the Nile, a place that appears in painted reliefs decorating the walls of one of the colonnades. Hatshepsut constructed many monuments and buildings. She also had many statues of herself erected at the sites of these monuments and buildings to impress upon the ancient Egyptian people her standing as a great leader and Pharaoh. Hatshepsut’s Temple at Deir El Bahri is her greatest achievement. It took 15 years to complete. The site was chosen because of its prime location. The ancient Egyptians considered this valley to be sacred for its connection to the funerary goddess Hathor.

This temple was built by Queen Hatshepsut, stepmother of pharaoh Thutmose III, who became regent for the adolescent Thutmose III when Thutmose II, her brother died. The almost-modern-looking temple blends in beautifully with the cliffs from which it is partly cut – a marriage made in heaven. Most of what you see has been painstakingly reconstructed.