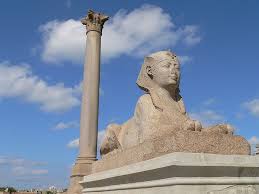 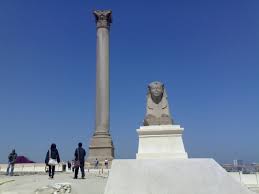 Its name is misleading. This single column standing on a rocky hilltop in the middle of Alexandria has nothing to do with the Roman Consul and General Gaius Pompey who was Julius Caesar’s rival in a civil war and was murdered by a Ptolomaic pharaoh in 48 BC when he fled to Alexandria.

This legend was started by Crusaders, who thought the 100-foot (30 meter) red Aswan granite pillar marked his burial site. The pillar is instead the a triumphal monument erected around 300 AD for the Roman Emperor Diocletian, but the true significance of this archeological site is what stood here before the pillar.It is the site of the Serapeum, Alexandria’s acropolis.