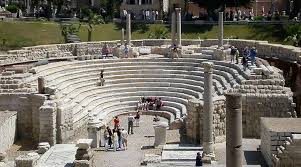 Basically Amphitheatre means double theatre and were grand and impressive in structure. Usually built in semi-circular shape, Amphitheatre was an open-air theatre with no curtains on the stage.

The Roman Theatre of Egypt is modest in size and most of the part of the structure is in ruined condition but still it is an excellent ancient structure of Roman period of Egypt. The theatre also consists of numerous galleries erected crudely.

These galleries contain rooms for more spectators along with arrangement of 700-800 marble seats around the stage.

The Amphitheatre of Pompeii, one of the earliest known Roman amphitheatres, in the 1800s.